I've recently had the experience of working with a uniquely milled set of wheat flours. (A whole grain flour and two other Extraction Flour samples sifted from the same batch of whole grain flour.) They were milled on a Unifine rotary impact mill.  I ran each flour through my standard test bake for 100% whole flours.   I substituted 98% for unbleached white flour in our bakery's standard Sourdough Baguette formulation at 78% hydration.  (The 2% unbleached white was the portion in the starter that seeded the leavening of the dough.) 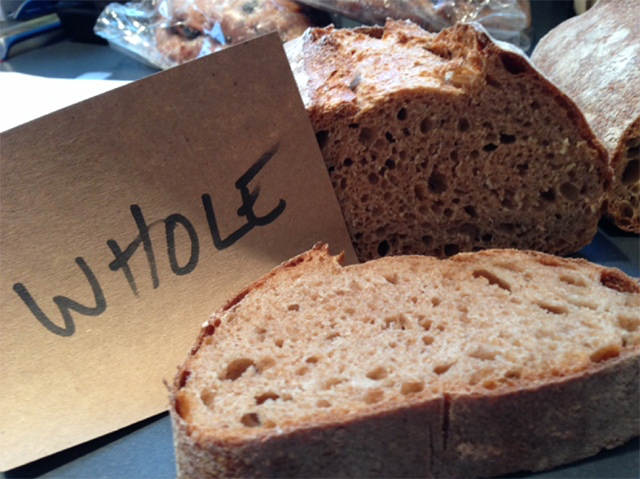 This flour was produced from the entire kernel of grain processed with no sifting through the Unifine mill. It created a dough that behaved on par with most whole wheat flours I have used in the past. It showed good development and strength in the mixer and throughout the fermentation process, retaining gasses, inflating on schedule and showing no sign of breaking down. The dough was quite tolerant to shaping, with very little deflating and proofed up well. Volume was as expected. Crumb structure was open for an artisan whole wheat bread, but fairly typical for this formulation. This was a sufficiently good performing whole wheat flour.

This Extraction Flour was started in the same milling method as the whole wheat, but some of the larger particles were removed by sifting to provide fewer sharp edges and a dough capable of trapping more gas during fermentation. (The miller used a relatively large mesh screen. At 93%, this extraction has a larger particle size distribution than roller milled white enriched flour which is typically a 72% extraction, devoid of all the bran and the germ along with some of the endosperm.)

I really liked how this flour handled as a dough. For a nearly full grain flour with more bran than a roller milled flour at similar extraction, I was surprised by how lofty the dough became when fully fermented. The alveolage (gas bubbles) in the dough were bigger and capable of holding more gas than I expected. The texture of the dough was very close to an unbleached white flour dough, but the color was a rich, soft brown. This dough was also tolerant to shaping with little deflating, but more delicate than the whole wheat--it took gentler handling to maintain the gas structure of the dough. This paid off in the oven with excellent spring and the nice open crumb structure that brings pride to an artisan baker. The volume of the finished loaf was 2/3-3/4 of a similarly produced loaf at the same dough weight using all unbleached white flour.

(The miller labeled this Extraction Flour T-85. It was an 88% extraction compared to 72% for roller milled white enriched flour.) This Extraction Flour originated from the same batch of whole grain flour bench tested above. However, all of the large particles were removed through aggressive sifting to bring the particle sizes in line with a roller milled unbleached white flour.

This flour produced a dough unlike any other I have handled. I will describe the Sourdough Baguette process that substituted this flour for roller milled, unbleached white flour. I ran my test with this flour side-by-side with the standard formula using white flour. The mixing process was nearly identical. The T-85 (miller’s term) was able to absorb more water than the white to achieve a comparable dough feel (that's always good news to a bread baker).

The dough came to development quickly. The dough itself could be stretched into thin sheeted baker's windows with ease, though had the elasticity and tenacity to resist this stretching without breaking easily or simply falling apart. The ferment was 30 minutes faster than that of the white flour dough over the course of 6 hours. When fully fermented, this dough had alveoledge on par with the white dough. It was holding HUGE gas bubbles, had a great balance of elasticity and extensibility, and maintained strength through handling and shaping. The only difference noted in comparing the two doughs at shaping was the T-85 felt a bit more brittle, for lack of a better term. The white flour dough was not deflating quite as much as the T-85. For me though, the T-85 was remarkable in its ability to hold gas and be handled on the bench with very little deflation. I've never experienced working with this quality of dough at the level of extraction this flour was milled and the quantity of bran it contains. The proof and bake proceeded on par with both doughs. The oven spring on the T-85 was sufficient to open the ears on the scores which can be difficult with high hydration, whole flour dough. The volume of the T-85 loaves was 3/4-4/5 the size of the white flour dough, with a nice open crumb structure and a uniquely soft texture for a mostly whole flour loaf.

Of the three flours I tested, the (T-85) aggressive extraction was hands down the most interesting to me. It created a dough that handled like a white flour dough, had the tolerance required of long fermentations and produced stunning loaves of bread. The opportunity to provide a more nutritious, more whole loaf of bread with the visual appearance, textures, and volumes of a standard artisan fare are appealing on many levels.